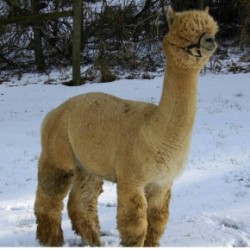 His fleece is dense, fine with an extreme degree of brightness and high amplitude to the fleece structure and a luxurious feel. His head is gorgeous with a full wool cap. Having bred his first females during the late summer and fall of 2012 we have just started to see his progeny arrive at both farms. as we all have anticipated the cria are displaying a consistency in color, density, fineness brightness and high frequency. We are excited as to what the future holds for our fawn breeding program with Snowmass Royal Legends on board.